This article was first published at Fifth Estate. It was written in February, but only just got online. 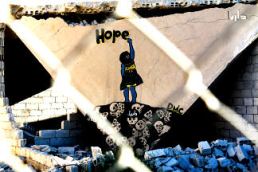 Hope amidst the wreckage in Daraya

Syria’s current borders were drawn up by imperial map makers a hundred years ago in the midst of World War I as part of a secret accord between France and Britain to divide the Mideast spoils of the Turkish Ottoman Empire. As the colonial state gave way to the post-independence state, power was transferred from Western masters to local elites.

The three major discourses which grew out of the anti-colonial struggle—socialism, Arab nationalism, and Islamism—all fetishized the idea of a strong state as the basis of resistance to Western hegemony. In the case of Syria, it led to the emergence of an ultra-authoritarian regime where power is centralized around one man in Damascus, Bashar al-Assad, bolstered by the state bureaucracy, and security forces. But today, new ways of organizing have emerged which challenge centralized authority and the state framework. END_OF_DOCUMENT_TOKEN_TO_BE_REPLACED