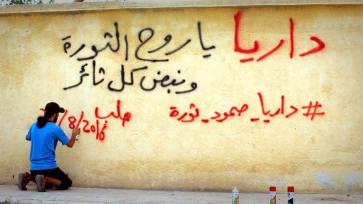 ‘Daraya: the spirit of the Syrian revolution, and the heartbeat of every rebel’

Four years following its liberation, the predominantly agricultural town of Daraya, strategically located near the capital, has fallen to the regime. A deal was reached to evacuate the 4,000-8,000 civilians remaining from a pre-uprising population of 80,000. The local fighters who defended their town so courageously will go to Idlib and join the resistance there. END_OF_DOCUMENT_TOKEN_TO_BE_REPLACED

The people of eastern Aleppo celebrated on Saturday after rebels broke through the siege that had been imposed on them by the Syrian regime and its allies since July 17. For almost a month, the areas of the city held by the revolutionaries since July 2012 had been turned into an open-air prison where some 300,000 people stockpiled food and supplies for fear of starvation.

It required a great feat of unity for the rebels, with their vastly inferior arsenal, to break the siege. The democratic nationalists of the Free Syrian Army joined together with Islamist militias and, crucially, Jabhat Fatah Al Sham, which until earlier this month had been known as the Nusra Front, Al Qaeda’s affiliate in Syria. END_OF_DOCUMENT_TOKEN_TO_BE_REPLACED