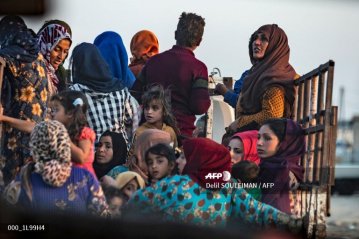 The recent Turkish offensive on north-eastern Syria and US withdrawal of troops from the region is unleashing yet another humanitarian catastrophe of epic proportions.

In the past few days over 130,000 Syrians have fled for their lives, in desperate search of safety. Dozens of civilians have been killed by Turkish bombs and assassinations by Turkish allied militias. Among the chaos ISIS prisoners have broken out of detention camps and are now running free – many of them foreigners, including children, whose respective states have refused to take responsibility for their nationals. END_OF_DOCUMENT_TOKEN_TO_BE_REPLACED

Syrians march towards the Turkish border demanding an end to the shelling or safe passage to Europe, on 30 August 2019 Photo via: MMC news

This was first published at Crisis Magazine

no one leaves home unless

home is the mouth of a shark

Crossing the Mediterranean Sea is fraught with danger. During 2018, an estimated 2,277 people died in their attempts to enter Europe. They were among the 141,500 refugees and migrants who reached Europe’s shores via the Mediterranean route that year. Some 10,400 of those migrants were Syrians arriving to Italy, Greece, Spain and Cyprus. END_OF_DOCUMENT_TOKEN_TO_BE_REPLACED